Can Lightning Strike A Hot Tub? – A Simple Explanation

Some links on this page may lead to us receiving a small commission at no additional charge to you. Read More

One of the best things about owning a hot tub is being able to enjoy warm soaks in almost any weather, but as you might imagine, there are a few situations in which jumping into your spa can be a terrible idea. Today we’ll cover one by asking, can lightning strike a hot tub?

During our ten years as one of the net’s most trusted hot tub guides, we’ve taught people how to safely enjoy their spas in the heat of summer, the depths of winter and even during the odd rain shower. But, when it comes to thunderstorms, there’s really no messing around!

A hot tub lightning strike is entirely possible and actually fairly likely if your spa is sitting in an open area. Lightning usually strikes the tallest object in its vicinity, so if your spa is situated in the middle of your garden, chances are you’ll be a prime target.

To make matters worse, water is an excellent electrical conductor (especially if it’s mineral-heavy), so if lightning strikes close by, the electrical charge can easily jump to your spa, becoming concentrated within the water you’re bathing in.

Even if a nearby lightning strike misses your hot tub initially, the electrical current can still travel through your spa’s electrical and plumbing lines, again resulting in a potentially deadly shock.

Hot Tub Deaths By Electrocution In The UK

Though we can’t find any solid figures about the number of deaths caused by electrocution whilst using hot tubs in the UK, we do know that between 30-60 people in the UK are struck each year, with around 5-10% of these strikes being fatal.

Some data from the US states that between 2002-2014, 23 people died after being electrocuted whilst using hot tubs. So, a fatal shock is certainly possible and definitely not worth taking a chance on!

Preparing Your Spa For A Thunderstorm

You’d be forgiven for thinking that popping your spa under a suitable hot tub shelter would be good preparation for a thunderstorm. Still, a hot tub in a summerhouse or under a canopy isn’t any safer than one out in the open.

An electrical current can still travel through the structure and down towards your pool, and a direct hit could even cause your shelter to collapse! Below we’ll cover the safest way to prepare your spa for a thunderstorm, and as a spoiler, it involves not using your hot tub at all!

The most likely cause of damage to your spa during a thunderstorm is an electrical surge caused by a nearby lightning strike. The best way to avoid this is to disconnect your hot tub from its power supply completely.

If your hot tub is hard-wired to your home’s electrics, trip the circuit breaker to prevent any current from travelling to your spa. A strong surge can surpass even a switch in the “off” position, so it’s essential to disconnect or trip the entire system fully.

2. Top up your chemicals

During a particularly nasty storm, it’s not unheard of for dirty rainwater to find its way into your tub, so it’s a good idea to top up your pool chemicals to ensure the water remains clean.

Attach your hot tub’s cover, making sure any buckles or zippers are completely fastened and consider covering the top of your spa with wooden sheets weighed down with bricks. This will help prevent damage from flying debris!

4. Cover with a tarp

Add an extra layer of protection by securing a large tarpaulin sheet over the top of your spa, making sure to lash it down to prevent it from flying away in the wind. You can try securing it with rope to a solid structure, or fastening it into the ground with deep tent pegs.

Take any removable furniture (umbrellas, shades, chairs etc.) and store it safely inside. If you have items that cannot be removed, lower them as much as possible and weigh or tie them down.

So, a hot tub can be struck by lightning, and that strike can easily prove fatal! For this reason, it’s best to avoid taking a dip during a thunderstorm altogether.

Disconnect your spa’s power as soon as you know a storm is coming, top up your chemicals and attach your cover before removing any furniture from your garden. Consider attaching a wooden sheet and a tarpaulin covering for extra protection, and remember that a gazebo or shelter won’t make things any safer! 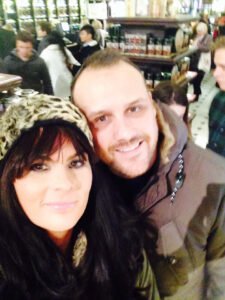 Hello, Welcome to my website. I’m John, and I created the InflatableHotTubGuide while researching these spas nearly a decade ago. Since its creation, the site has become the leading UK resource for many models. As a passionate hot tub user, I love to test and explore all the latest machines this industry keeps creating. I hope you find our content helpful.

As an Amazon Associate, I earn from qualifying purchases.

We do not provide medical advice or treatments from using these spas. If unsure, please refer to the manufacturer.